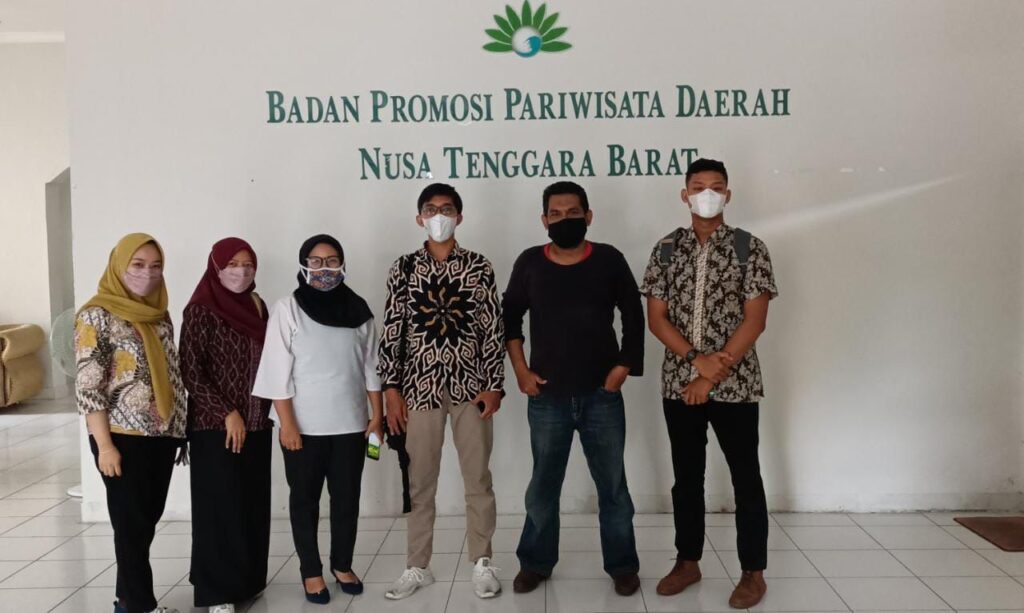 Entrepreneurship is now mushrooming with many of its main players being young people. In its application, the real form of this entrepreneur is better known as startup which is now one of the outputs of learning on campus. Sumbawa University of Technology as a technology-based campus certainly has a great opportunity in creating technology-based startups from its academic community. On a visit

Visit of Vice Rector III Bid. Research and Innovation to the Regional Tourism Promotion Agency (BPPD) of NTB Province, one of the main points is about campuspreneurship by utilizing the tourism potential of the village village in Sumbawa to be promoted in the frame of digital startup. Of course, the goal is so that the sustainability of the UTS program in the village can continue to be done and introduced throughout the country. The visit to BPPD (13/9/2021) was welcomed by the BPPD Team, Mr. Ari Garmono as the Head of BPPD accompanied by Mr. Askar Daeng Thursday, Mrs. Lia Rosida, and Mrs. Leja Kodi.
In this short discussion, the UTS Team received a lot of information related to the development of Digital Start Ups in NTB, especially related to tourism promotion.

“Our focus right now is on how to develop business models in digital form and our plan is to create a movement of 1000 digital start-ups in NTB, considering ntb is very lacking in this field,” said Mr. Askar.

The presentation was enthusiastically welcomed by Warek III UTS, considering that under his leadership there was a sub-directorate of Incubation Technology that was being worked on at UTS.

“We in the Field of Research and Innovation want to focus on the formation of Entrepreneurs in the UTS region,” said Mr. Umam.

This was approved by Mr. Askar, where he explained how important digitalization is, especially in pandemic times like this. For him, to develop a system does not have to be an expert in the field of IT, but must be people who do have the will to learn. The concept of digitalization in the field of economy and tourism that he and his development team, has helped boost the promotion of NTB Tourism.

“In today’s digital age, when all information is very easy to obtain, competition is materially very high. So you have to be able to see and take advantage of the opportunity.”

The decrease in revenue from all aspects of both aspects of buying and selling, services and tourism cannot be separated from the impact of COVID-19. “In times like this, we are all asked to think critically how we can survive,” added Mrs. Leja.

In the interactive discussion, the BPPD gave a lot of information about the importance of the role of developers in boosting the economy in the online system as it is today. Also how the development of tourism in the future, from the point of view of entrepreneurs.

“Do not measure the tourist village from our point of view, but from the market. Therefore it is necessary to research and our market is beyond its great potential, such as the USA, European countries etc. All villages can be developed because we build a culture-based economy. There has to be an initiation to it, and at the moment it’s still rarely talked about.”

Pak Askar himself has been engaged in the digital field since 2019, and became a master planner who often fills activities related to Entrepreneurship abroad. Similarly, his team, Bu Lia who became a guest lecturer at several universities in Malaysia.

In the discussion, Warek III UTS gave an explanation related to the Merdeka program which also focused on the development of tourist villages and cultural villages.

“There are many things that we can synchronize, such as The Tourist Village which is one of the flagship themes of the Merdeka Program, as well as Start Up for students so that when they graduate they already have a business. We also currently have a Career development center (CDC) that is concerned in the field of preparing students after graduation for a career, both entrepreneurial and industrial,” said Mr. Umam.

Uts also conducted further discussions with the Tourism College because there are similarities in programs related to tourism villages that are in sync with the Merdeka Program and campuspreneur values that want to be realized.

The BPPD team provides input that to get to the campuspreneur stage, it needs efforts early on they are introduced to startups, students in this case need to have a container either SMEs or others. Hopefully, after graduation it has become a start-up that is ready to compete” added Mr. Askar.

The discussion ended with the readiness of BPPD in supporting UTS programs, especially those related to regional promotion and tourism, as well as the start-up formation program to support the regional and provincial economies.

UTS ESTABLISHES COOPERATION WITH THE MINISTRY OF ESDM, REALIZING THE CENTER OF EXCELENT MINING IN SUMBAWA